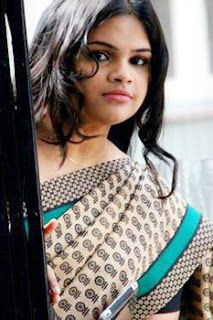 Santhanam's second outing as a lead hero, Inimey Ippadithaan is being noted for its unconventional ending and the film has been met with its share of good reviews. Vidyu Raman's cameo in the end is particularly being appreciated by fans and folks from the industry. Her Twitter timeline is flooded with congratulatory messages. We chat up with the bubbly young lass about the feedback she has been getting.
"I saw the film here in Madurai with the team of 'Thanni Vandi', the film that I am shooting right now. I am getting a whole lot of positive feedback and I am glad that I took up this role when Santhanam narrated it to me so beautifully during the shoots of VSOP.
There were 2 reasons why I took up this role, even though it was clear that I would get just a scene or two. First, to smoothly transition from comedy roles to performance oriented parts, and secondly because of the message which was much-needed, relevant and applicable to all.
Generally I am used to making people laugh, but with this role there are quite a few who ended up all choked and almost moved to tears by my role. This shows that the message has touched a chord with all.
I thank Santhanam and the director duo Muruganand, as it takes guts to not go for a stereotypical ending - the regular hero-heroine unity in the end. The dialogues have also played a part in the impact."
On being asked about her getting typecast in most of her films, as the heroine's funny friend
"The audience kickstarted it when they accepted me in Neethane En Ponvasantham as Santhanam's pair. So, the tag 'comedienne' has just stuck on to me, as it is a niche space and there is no one to fill this slot after Sarala mam and Manorama Aachi (my role model).
Inimey Ippadithaan has given me an ideal transition to this 'performing' space with little comedy elements, as people wouldn't have accepted me in a totally drastic heavy role overnight."
Source :- Behindwoods
Share !