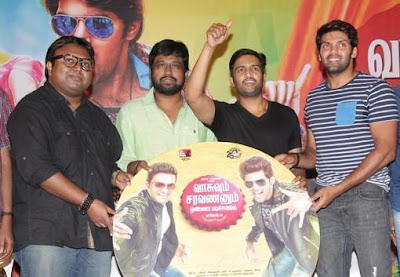 Filmmaker Rajesh and Santhanam never miss to compliment and credit each other the praises for success. In fact Santhanam has opened up saying that Rajesh is one of the most predominant reasons behind his emergence as hero. It all happened yesterday during the press meet of Vasuvum Saravananum Onna Padichavanga that stars Arya, Santhanam and Tamannaah in lead roles. Speaking about the experience, Santhanam said that Rajesh has been offering him substantial roles and even gave a good place in his posters equal to that of heroes, which prompted him to become a solo hero. Rajesh on his part has mentioned that he would be soon directing Santhanam in lead role. VSOP is produced by Arya’s The Show People and will be hitting screens on August 14.