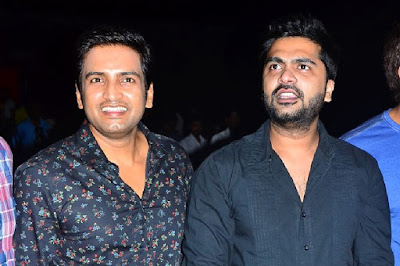 Simbu, who has proven himself in many fields, is out to prove himself as a music director too.
Yes, the actor has confirmed that he will be scoring music for close friend Santhanam‘s upcoming filmSakka Podu Podu Raja.
Actor Santhanam was the first to make the announcement on Twitter.
He tweeted, “Its my #Godfather & #Humane @iam_str #str who is gonna be the #MusicDirector for the 1st time for #sakkapodupoduraja #Grateful #Blessed.”
Simbu,for his part, tweeted, “1st time as #MusicDirector 4 #SakkaPoduPoduRaja Only for coz it is @iamsanthanam. New journey begins, need your love & blessings. #GodBless.”
Several people from the film industry have have welcomed Simbu’s decision to score music as well.
Talking to SouthScope, a source close to the actor said, “Actually, he (Simbu) scores music for a lot of songs at home. People who are around him know he is a good musician. There would be jamming sessions. Usually, at any given point, there would be at least 20 people at home. VTV Ganesh, Santhanam who are all close friends of Simbu have seen him score music. So, Santhanam requested Simbu and Simbu agreed because it was Santhanam,” the source says.
So, how many songs will Simbu be scoring for this film? “It is early to talk about it. We do not know if they will use songs for which he has already composed or whether he will score fresh songs. Whatever be the case, everyone is excited. Several people have called up congratulating him and he has been thanking everyone.On the whole, 2017 is bound to be a great year for him.”
Source : South scope
Share !