Shoot at New York and Brooklyn 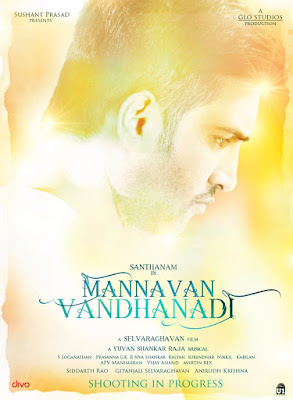 Santhanam and Selvaraghavan will be leaving to the US to shoot their film, which has now been titled Mannavan Vandhanadi, in February . The team will be shooting in locations around New York and Brooklyn in the US. But before that, there will be a 15-day schedule in Chennai after the Pongal holidays.
“The US schedule will involve both songs and talkie portions. And as per the storyline, Selva wanted to shoot there during the fall season, and that is why we decided to schedule colours,“ reveals the film’s producer Sushant.
The team finished shooting the first schedule of the film last week, and Sushant says that they have completed 35% of the film in this schedule. “It is an out-and-out romantic film, and Selvaraghavan and Yuvan Shankar Raja, the film’s music director, are kicked about returning to this space after a decade. Yuvan has finished composing one song, which we have shot during the first schedule. We will be shooting two songs in the US,“ he adds.
Source : Other Media
Share !