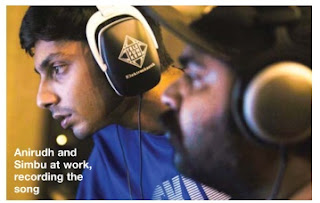 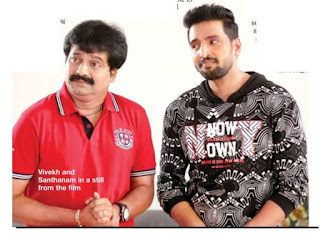 We had told you that Simbu is turning composer for his good friend Santhanam's Sakka Podu Podu Raja, directed by Sethuraman.Now, Simbu has roped in Anirudh to sing the herointroduction number in the film, which has Marathi actress Vaibhavi Shandilya as the female lead.Interestingly , Simbu has also written the lyrics of this song, titled Kalakku Machaan Kalakkure.

Talking to us, actor VTV Ganesh, who is also the film's producer, says, “Since this is the introduction song of Santhanam, Simbu felt that it should have a special singer and asked Anirudh to sing it. We recorded the song by Tuesday mor ning, and Ani left for London immediately after that.“ He adds that they are planning to shoot this mass song in and around San Francisco, US.
Meanwhile, Simbu is expected to record another song on soon, which will feature the vocals of his father T Rajendher. “This is a celebration song in a village. For another song, a romance number, Simbu will be introducing a male and a female singer.
There will be five songs in total,“ says Ganesh, who adds that Simbu is using mostly live instru ments in all the songs.