Server Sundaram taught me to chop onions like a pro 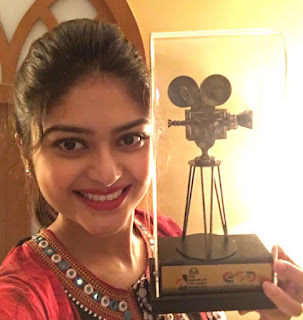 Maharashtra-based debutant Vaibhavi Shandilya says she speaks ‘decent Tamil’ and understands the language. She has worked in a couple of Marathi films and also an Arabic film. Making her K’town debut as a student in Santhanam’s Server Sundaram she will also be seen in Sakka Podu Podu Raja.
A stage artiste, and a classical dancer proficient in Bharatanatyam and Kathak, Vaibhavi’s resume is impressive. She sums up experience of working in Server Sundaram as “interesting and great”. Her decision to do projects in Tamil is proof of “my desire to experiment”.

How was your experience working in the Tamil film industry?
Every film I have worked on has had a different vibe, a different culture. And this (Tamil) is a completely different language, but I had great fun.
Since Server Sundaram is my first film in Tamil, it will always be close to my heart. Anand Balki was guiding me throughout and I had such a warm welcome here.
That day, I decided I should do more films in Tamil. Everybody on the sets treat artistes with so much respect. South Indian technicians are cultured. Even if I don’t shoot for a day, I miss my work. Santhanam is a fantastic co-star.
How did you prepare for the role?
Anand asked me to come to Chennai a week before the shoot to experience an actual restaurant kitchen. I love cooking and naturally enjoyed the process. We shot major scenes in Accord Metropolitan. I was given basic training in cooking and cutting vegetables.
I was also made to wash some huge vessels and mop the floors. The job of a chef is physically demanding. I now know to chop an onion faster than before.

Did you know who Santhanam was before you got on board?
Of course, I knew who Santhanam was. He’s an amazing person. I don’t think any actor could have helped me like the way he did. We became good friends (smiles).
I am a fresher and he’s an experienced artiste. But he’s down-to-earth. He helped me with the language, often repeating lines to help me phonetically and how one should take natural pauses.
Have you watched the original Server Sundaram (1964)?
I watched the original twice, and it is a classic. I heard that Nagesh was a legendary actor, so I wanted to do a good job. The first time I watched, I observed the screenplay and emotions.
The second time, I paid attention to the dialogues. I enjoyed the movie, thanks to subtitles!  Initially, I didn’t know who Bijesh was. Then I was told that he’s Nagesh’s grandson. When I watched the old movie, I realised both have similar looks.
What next after Server Sundaram?
We are almost done with Sakka Podu Podu Raja. It’s different from Server Sundaram. We shot extensively in Bengaluru, Chennai and Puducherry.


We are headed to the US next to shoot songs. I listened to the songs and Simbu has done a fabulous job. Also, I am doing a film in Kannada titled Raj Vishnu. Recently, I got a confirmation from Dream Warrior Pictures that I am on board for a yet-untitled film that stars Harish Kalyan in the lead.