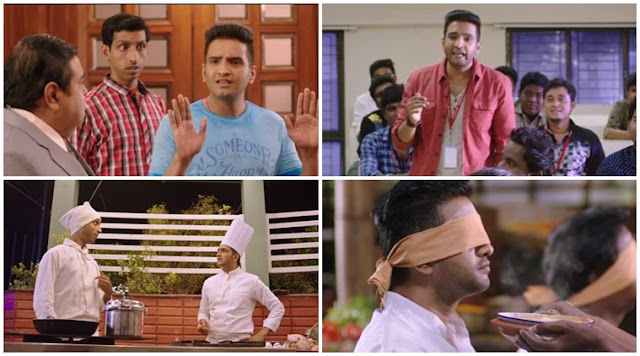 Server Sundaram stars Santhanam in the lead role, and Vaibhavi Shandilya is cast opposite him in this film. It is helmed by Anand Balki, and the music for this film is composed by Santhosh Narayanan. Though the title of the film is same as the hit 1964 film starring Nagesh, R. Muthuraman, K. R. Vijaya, debut director Anand confirms that this is not a remake. The film is bankrolled by Kenanya Films, and producer Selvakumar got the rights for the title from AVM production. After discussing with late comedian Nagesh’s family, the actor’s grandson Bijesh was also cast in the film.


The trailer leaves you in splits with Santhanam’s witty remarks about people’s behaviour today, and Bijesh compliments Santhanam perfectly through out the film. This doesn’t seem like a one-man show, and it surely doesn’t look like a medium budget film. It looks to be majorly shot abroad, but in fact the team had hired an island in Goa to shoot the film. The trailer reveals that the film is going to be a treat to your eyes, as the cinematography looks clean and refreshing. If the plot and screenplay are as strong as what is projected in the trailer, Santhanam might see the first big hit in his career as a hero.
| ‘Server Sundaram’ team hires island in Goa for shoot
Though the trailer has funny comebacks, it is clear that comedy is not the genre. Anand seems to be aiming at debuting as a director of a full-fledged entertainer. Santhanam plays the role of a catering student in this film, while Bisjesh assists him. It is about how the two of them seem to participate in a reality show/cooking competition. It is about how Santhanam is affected by ‘world out there’, and how he deals with it.
Saurabh Shukla will also be playing a pivotal role in the film.