I discuss everything related to my career with Simbu 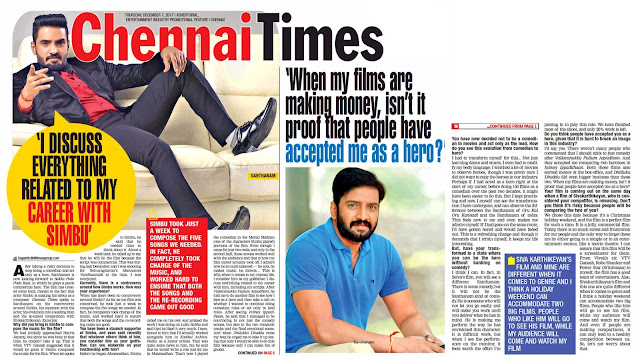 After taking a risky decision to stop being a comedian and act only as a hero, Santhanam is now looking forward to Sakka Podu Podu Raja, in which he plays a pucca commercial hero. The film has created some buzz, thanks to the fact that actor Simbu is making his debut as a composer. Chennai Times spoke to Santhanam on the controversy around Simbu, his equation with the actor, his evolution into a leading man and the so-called competition with Sivakarthikeyan. Excerpts:

Why did you bring in Simbu to compose the music for the film?

We had initially approached Harris Jayaraj, but since he was busy at that time, he couldn’t take it up. That is when VTV Ganesh suggested that it would be great if Simbu composed the music for the film. When we spoke to Simbu, he said that he needed time to think about it. About a week later, he called up to say that he will do the film because the script was commercial. This was during last December, and I was shooting for Selvaraghavan’s Mannavan Vandhaanadi at the time. I was overjoyed.

Currently, there is a controversy around how Simbu works. How was your experience?
When has there been no controversy around Simbu? As far as our film was concerned, he took just a week to compose the five songs we needed. In fact, he completely took charge of the music, and worked hard to ensure that both the songs and the re-recording came out good.

You have been a staunch supporter of Simbu, and even said recently that whatever others think of him, you consider him as your godfather. Can you elaborate on your relationship with him?
Before he began Manmadhan, Simbu called me on his own and praised the work I was doing on Lollu Sabha and said that he liked it very much. I mentioned to him that I’d actually worked alongside him in Kadhal Azhivathillai, as a junior artiste. That was quite some news to him, but he said that he would write a role just for me in Manmadhan. That’s how I played the comedian in the Mottai Madhan (one of the characters Simbu played) portions of the film. Even though I came for just two reels, and only in the second half, those scenes worked well with the audience and that is how my film career actually took off. I admire how he is multi-talented — he acts, he makes music, he directs… This is why, when it comes to my cinema life, I consider him as my godfather. I discuss everything related to my career with him, including my scripts. After Vallavanukku Pullum Aayudham, he told me to do another film to see how I fare as a hero and then take a call on whether I wanted to continue doing comedian roles or act only in lead roles. After seeing Inimey Ippadithaan, he said that I managed to be convincing in not just the comedy scenes, but also in the two romantic tracks and the final emotional scene. And when Dhilukku Dhuddu came my way, he urged me to take it up saying that only I would be able to do that film because only I can make fun of ghosts.

‘When my films are making money, isn’t it proof that people have accepted me as a hero?’

You have now decided not to be a comedian in movies and act only as the lead. How do you see this evolution from comedian to hero?
I had to transform myself for this... Not just learning dance and stunts, I even had to modify my body language. I watched a lot of movies to observe heroes, though I was pretty sure I did not want to copy the heroes in our industry. Perhaps if I had acted as a hero right at the start of my career, before doing 150 films as a comedian over the past two decades, it might have been easier to do this. But I kept practising and now, I myself can see the transformation I have undergone, and can observe the difference between the Santhanam of Oru Kal Oru Kannadi and the Santhanam of today. This feels new to me and even makes me admire myself. If I had gone on the same route, I’d have gotten bored and would have faded out. This is a refreshing change and though it demands that I strain myself, it keeps my life interesting.

But, have your transformed to a state where you can be the hero without banking on comedy?
I think I can. In fact, in Selva’s film, you will see a different Santhanam. There is some comedy, but it will not be the Santhanam kind of comedy. He is someone who will not let you go easily and will make you work until you deliver what he has in mind. He is making me perform the way he has envisioned this character. It is difficult work, but when I see the performance on the monitor, it feels worth the effort I’m putting in to play this role. We have finished most of the shoot, and only 20% work is left.

Do you think people have accepted you as a hero, given that it is hard to break an image in this industry?
I’d say yes. There weren’t many people who commented that I should stick to just comedy after Vallavanukku Pullum Aayudham. And they accepted me romancing two heroines in Inimey Ippadithaan. Both these films also earned money at the box-office, and Dhilluku Dhuddu did even bigger business than these two. When my films are making money, isn’t it proof that people have accepted me as a hero?

Your film is coming out on the same day when a film of Sivakarthikeyan, who is considered your competitor, is releasing. Don’t you think it’s risky because people will be comparing the two of you?
We chose this date because it’s a Christmas holiday weekend, and the film is a perfect film for such a time. It is a jolly, commercial film. Today, there is so much stress and frustration for our people and the only way to forget these are by either going to a temple or to an entertainment avenue, like a movie theatre. I can assure that this film will be a stressbuster for them. From Vivekh sir, VTV Ganesh, Robo Shankar and Power Star (Srinivasan) to myself, the film has a good team of entertainers. Also, Sivakarthikeyan’s film and this one are quite different when it comes to genre and I think a holiday weekend can accommodate two big films. People who like him will go to see his film, while my audience will come and watch my film. And even if people are making comparisons, it can only lead to a healthy competition between us. So, let’s not worry about that.
Share !